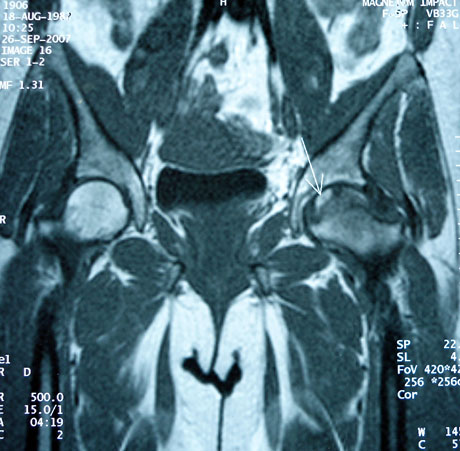 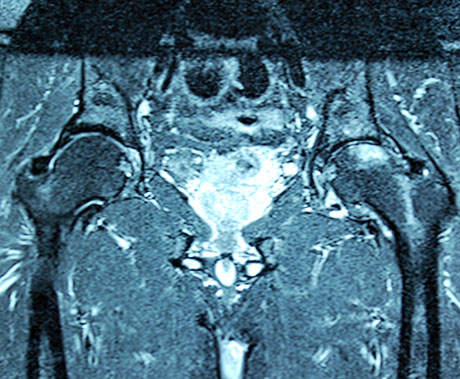 Aseptic non-traumatic osteonecrosis of the femoral head is a painful disorder in which there is subchondral bone death due to insufficient vascular supply that can lead to femoral head colapse and the need finaly for total hip replacement.  Affecting young patients and their most productive age.  The pathogenesis of the disease is unknown.  As osteonecrosis may be a disease of mesenchymal stem cells, the possibility has been raised than bone marrow containing osteogenic precursor implanted into the necrotic lesion could be of benefit in this condition.

Several risk factors have been described including chronic use of steroids, coagulopathies and alcoolism.

Decompression of the femoral head can be achieved by surgically removing a core of bone.  This reduces intramedullary pressure and thereby prevents further vascular impingement and allows for new bone formation.

Biologic augmentation after core decompression has been attempted with demineralized bone matrix and bone morphogenetic protein.
However, the relative insufficiency of osteoprogenitor cells in the proximal femur of osteonecrotic hips has led to the use of bone marrow stem cells through a single hole drilled into the necrotic area in patients with atraumatic osteonecrosis.

Mesenchymal stem cells have the potential to differentiate into chondrocyte, osteoblasts, fibroblasts, marrow stroma and other tissues of mesenchymal origins. MSCs maintain the ability of mitotic multiplication without significant loss of their specific biomolecular characteristics over extensive population expansion and are capable of differentiating into multiple mesenchymal phenotypes.

The mesenchymal stem cells (MSCs), the non-hematopoietic progenitor cells, are multipotent stem cells from a variety of tissues with the capability of self-renewal, proliferation, differentiation into multi-lineage cell types, as well as anti-inflammatory and immunomodulatory.  These properties make MSCs an ideal source of cell therapy in bone and joint disease.

Autologous stem cells currently obtained from bone marrow of the patient during surgery from the pelvis (iliac crest), and after specific processing are injected at the defect in the femoral head directly without culturing. Stem cells derived from bone marrow have greater regenerative capacity compared to the stem cells derived from other parts such as fat tissue or synovial fluid. Also applied directly after receiving and processing and require no cultivation and proliferation of these in special workshops delaying the therapeutic approach a few weeks.

After this period of time surgical exposure of the proximal femur, a bone plug was removed using special drills.  In this hole we put the autologous stem cells with special material. 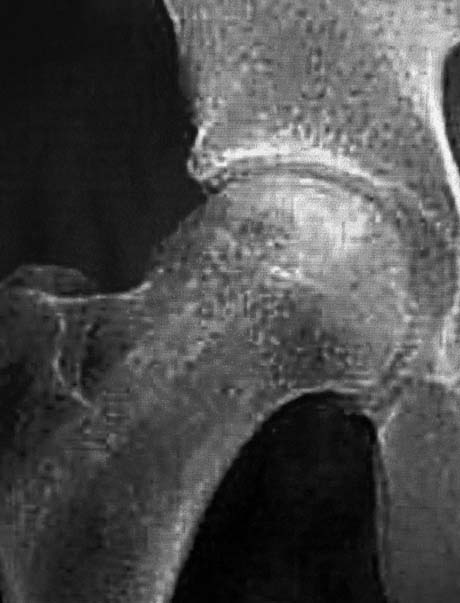 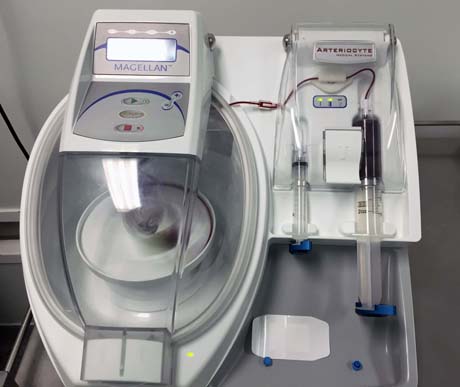 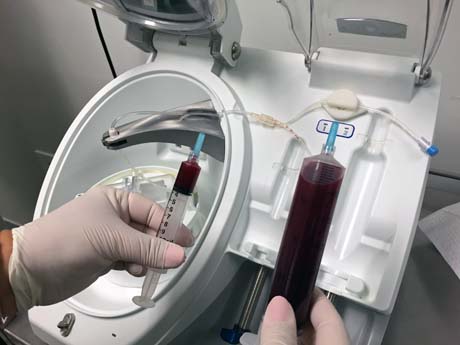 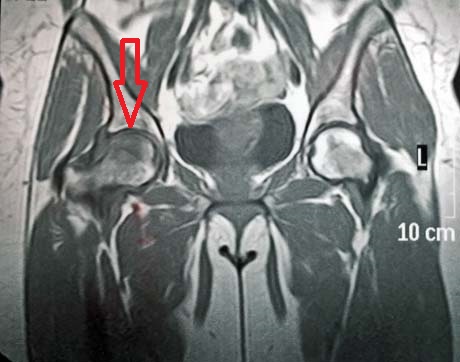 Female 51 years old with pain in the right hip from 3 months ago. Examination MRI showed osteonecrosis of the femoral head right. 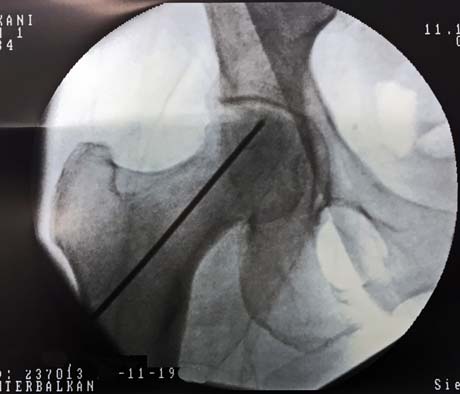 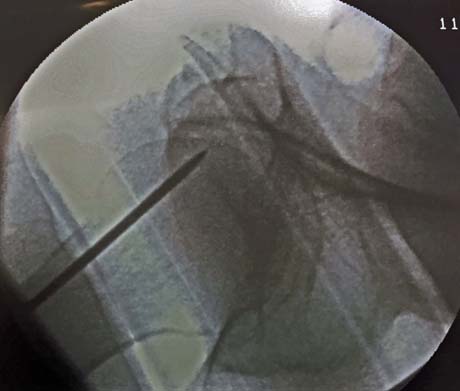 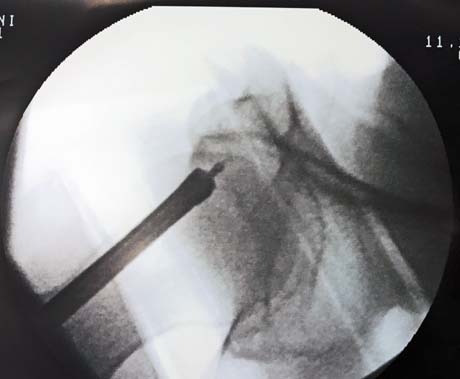 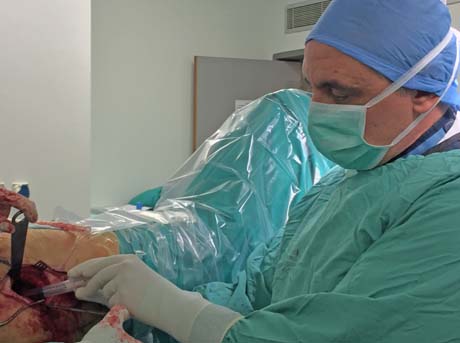 Post-op X-ray of the right hip Magnetic resonance imaging of the hip after 5 months post-op and the injection of stem cells. Osteonecrosis of the femoral head has subsided completely. The patient is fully cured. After surgery on the patients right hip the symptoms began to subside immediately. The patient gradually weight bearing the right limb, and five months after it is fully functional without any pain and stiffness in the hip joint.
The method of treatment applied to a patient is the modern conjunction surgery and cell therapy (stem cell therapy), which combination tends to replace older surgical methods are highly invasive (vascularized fibula autograft). This new method is one of the minimally invasive surgery which means minimal postoperative pain, quick recovery and return to social and sporting activities.

Stem cells -based gene therapy is clinically relevant.  Successful treatment of precollapse osteonecrosis of the femoral head could preserve the hip and avoid total hip replacement.

The method also can used in the treatment of many others musculosceletal disorders, inluding genetic disorders, bone tumors, bone defects, fractures, and osteolysis. 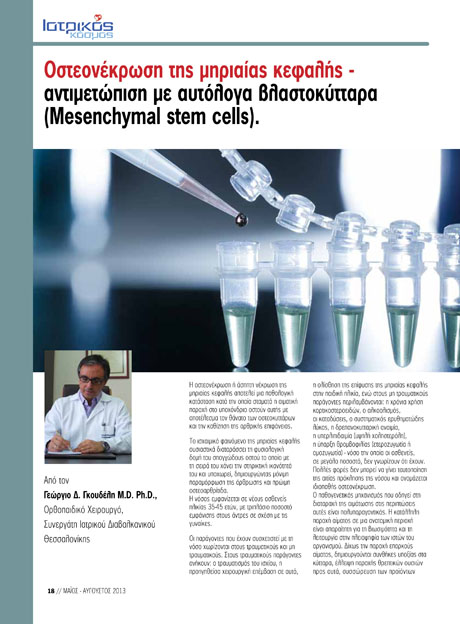 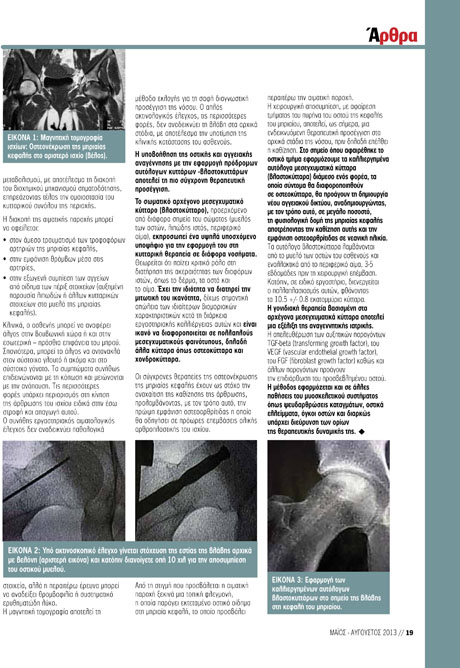 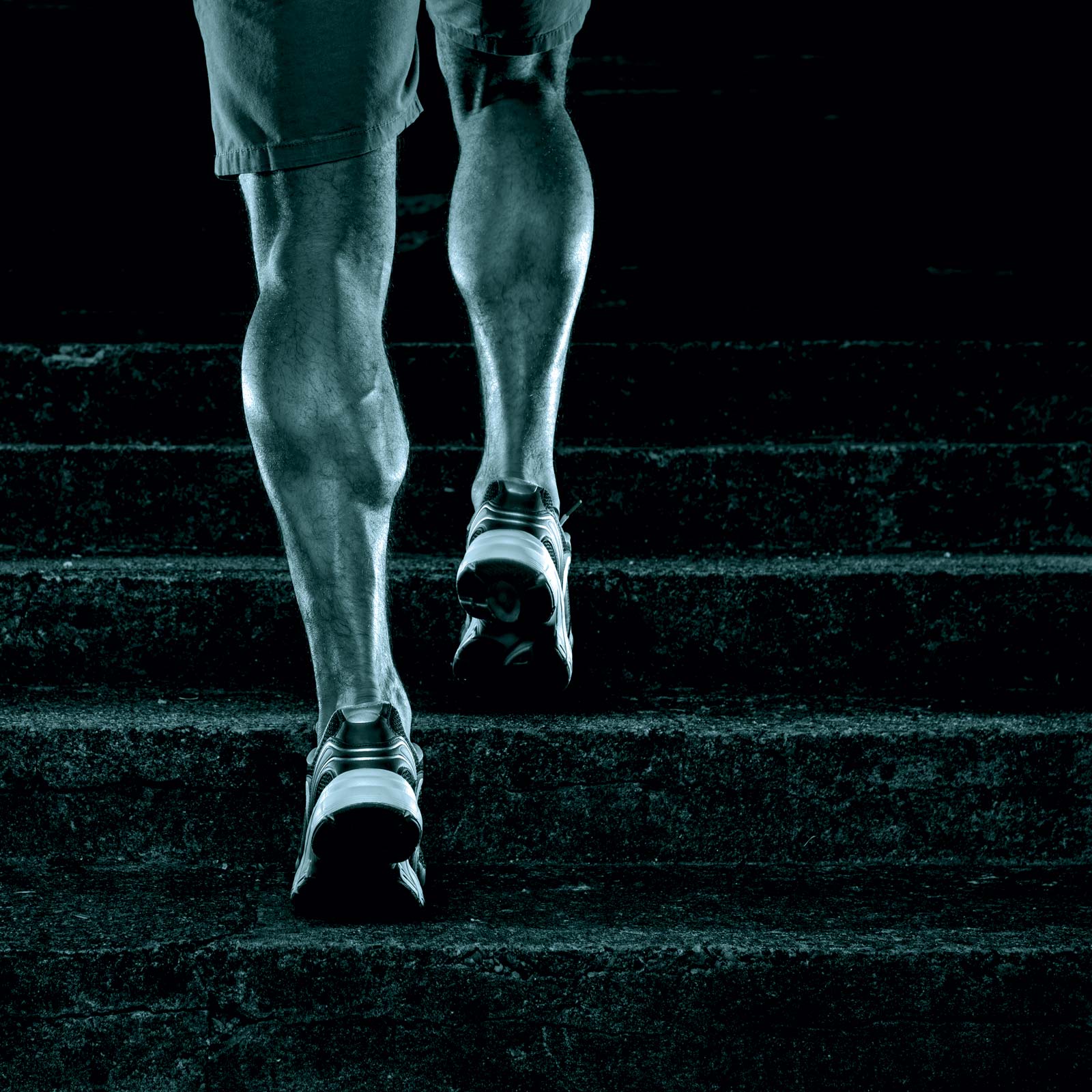